Roo, a 20-year-old, ex dressage horse came to my barn a little over a year ago, underweight, behind on immunizations and worming, his feet and teeth were are mess. Soon we had him up to date on everything, looking much better. But there was still something missing. He was struggling, having a horrible reaction to tick bites which would swell between 3-4 inches in diameter looking like puncture wounds. They would ooze and bleed for up to a week. At the vets advice, all sites were hosed with cold water twice daily and treated with a topical ointment. It took two weeks for the bites to dry up at which point new bites would appear. As his recovery time kept getting longer and longer, Roo became irritated by the now daily debriding of his wounds and cold hosing. His weight was okay and while he was generally happy and alert, he didn’t look like he was thriving. At this time he scratched up one of his hind legs and an eye lid. 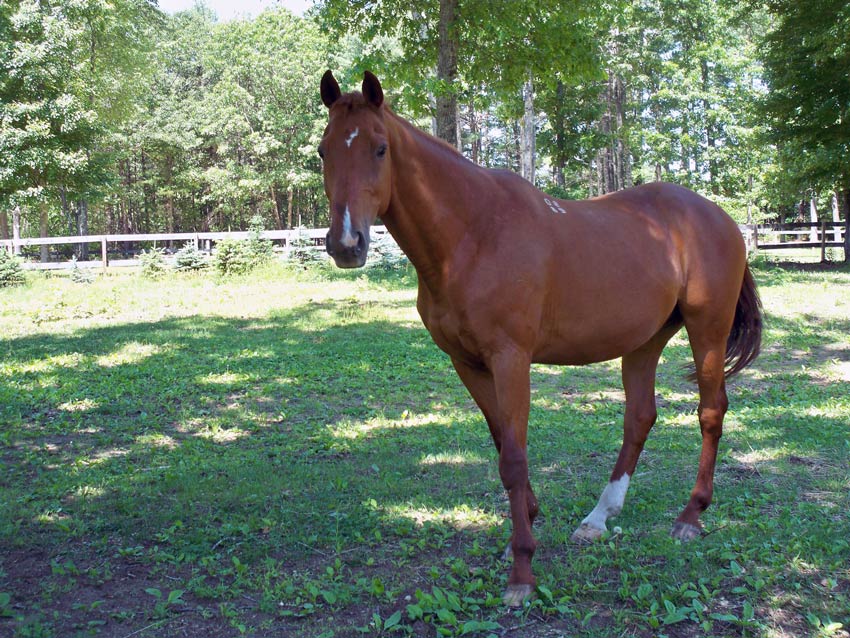 For any other horse these two mild injuries would have healed quickly. But with the tick bites, the minor scratch in his hind leg became an infection that he just couldn’t beat, his eye remained swollen shut. The vet was so helpful but at the end of Roos oral antibiotic dosing, there was still some lingering edema. He was getting better, but just. Then a boarder suggested your product Immuzim. Within 48 hours of being on Immuzim, not only had the lingering swelling on his hind leg injury disappeared but his normal morning stocking up was much less. Most noticeably he had zero swelling from any bites (ticks or otherwise) and his overall health was much improved. The elusive “something” that was missing became clear. You could actually see this horse felt better. He had more “umph” in his stride, more active during turnout, and the already personable gelding was even more so. We joke that Immuzim has taken years off his age, and instead of being the barn push-over he was now that barn stallion. Our vet was impressed and wanted to see the bottle to read more about it. I had hoped to send a before and after picture to demonstrate just how dramatic the difference Immuzim has made. Fortunately, this boy continues to have no problems with ticks and truly acts like a younger, healthier horse, so I only have this “after” shot. I wish I had found your product sooner. Not only would it have saved on time consuming care, antibiotics and bills but more importantly it would have saved this horse a whole lot of discomfort. Truly I cannot thank you enough!