Speedi-Beet is beet pulp reinvented, essentially it has gone through a process forcing the fibres apart and extracting 95% of the sugars, making it a much healthier product for horses.

Speedi-Beet is 95% sugar-free and soaks in 10 minutes or less, an advantage for barn management, yielding 3-5 times more product than beet pulp shreds and more economical. Beet pulp is the byproduct from the manufacturing of sugar for human use, namely the ‘leftovers’. Speedi-Beet is more palatable and once soaked has a mash consistency.

Sugar beet pulp may be molassed containing up to 20% sugar. Speedi-Beet is manufactured from unmolassed beet pulp, with typical levels of 5% NSC. Problems may occur if too much sugar (or starch) is fermented in the hindgut. Speedi-Beet is one of the most healthiest, natural and simple ways to feed your horse. Regular beet pulp is usually prepared 12 to 24 hours in advance, making it susceptible to spoilage and attracting unwanted guests. Unmolassed beet pulp may still contain up to 12% sugar that can be detrimental to horses with Cushings, insulin resistance or horses prone to founder.

Speedi-Beet can be used for weight maintenance. Feeding before turn out, or before providing forage, will make your horse feel quite full. As horses are trickle feeders, they will tend to graze less and more slowly. You can feed him less and he will lose weight without losing condition.

Since Speedi-Beet soaks up more water, it is recommended as a hydrating feed. During winter months when horses tend to drink less, using warm water with Speedi-Beet adds to total water intake. Speedi-Beet is great for traveling to shows when horses can be finicky about drinking or after being worked.

Beaten to a Pulp

Sugar beet is a root vegetable that stores its energy as table sugar (sucrose) in its swollen root, and it may weigh 1-2 kg and contain around 17 per cent sugar by the time it’s harvested. It looks rather like an elongated swede or turnip in its fresh, unprocessed state.

The vegetable is grown for its high content of sugar, which is extracted from the flesh, leaving the fibrous root pulp behind. And it’s the root pulp which is used as animal feed. About 10 million tonnes of fresh beet are grown in the UK each year, with about 1.4 million tonnes of sugar and 750,000 tonnes of animal feed made from this.  Much of this fibrous root pulp is mixed with molasses to increase its energy and palatability for stock, but an unmolassed version is available. This unmolassed sugar beet, compared to other concentrate feeds, is high in fibre (20 per cent), low in sugar (about 5 per cent) and moderately high in energy for horses, being just a couple of megajoules lower than oats per kg of dry matter. Sugar beet pulp contains a high proportion of soluble fibre, mostly pectins, which means its fibre is more easily and quickly digested compared to that found in forage like hay. In addition to being a good source of fibre and energy, sugar beet has a better mineral balance than straight cereals, with much higher levels of calcium and lower levels of phosphorus. It is particularly useful for competition horses as the molasses gives an immediate release of energy while the unusually highly digestible fibre can act as a slow-release energy source.

What’s it good for?

Sugar beet pulp is a versatile feed, because it can be fed in small quantities to overweight horses as a mixer for multivitamin and mineral supplement instead of chaff. And it can be given in large quantities to a poor doer for weight gain or a working horse for energy.

Molassed sugar beet (25% sugar 15% fibre) is a useful feed for horses who require a substantial amount of dietary sugar — eg, sick or hard-working animals. But the unmolassed version is more useful because it can be fed to all horses, ponies and donkeys, and can be given in relatively high amounts.

Sugar beet is also a useful way of keeping competition horses and horses in hot weather hydrated, due to the high water and electrolyte content. Remember, soaked sugar beet has been diluted in water, similar to orange squash. This means you are diluting the fibre and nutritional content, too. So to get the full benefit of sugar beet as a concentrate feed, it needs to be weighed/scooped out before soaking.

The sugar beet pulp destined for the horse feed market tends to be pelleted after sugar extraction, although some is left as shreds. The benefit of the shreds over pellets is that they need only 12 hours soaking rather than 24.

In the past few years, a more processed sugar beet product has become available, which takes only 10 minutes to soak before feeding. Speedi-Beet by British Horse Feeds was the first, but now others are available, too. Speedi-Beet is made from unmolassed British sugar beet which is micronized (a type of cooking) and then flaked. The process retains nutrients but increases the surface area to aid the rate of water absorption — hence making it a quick-soak form of sugar beet.

Plain unmolassed pellets are also available, although they do require a 24 hour soak like the molassed version. Sugar beet is used in commercial compound feeds such as nuts and coarse mixes, too.

Unmolassed sugar beet is an excellent healthy alternative to starchy grain-based concentrate feeds. And due to its high fibre and low starch level, it does not have the gut-disturbing potential of grain and grain-based feeds, and nor is it at all ‘heating’ (causing excess exuberance). It is well known that large meals of starchy grain-based feeds can cause gut disturbance, and feeding more than about 3kg per day of such feeds significantly increases the risk of colic.

Research by nutrition experts at Edinburgh and Aberystwyth universities about a decade ago, showed that sugar beet pulp was a more nutritious feed for horses and ponies than previously believed. This led to the development of ‘high digestible fibre’ feeds.

Also in the last decade, researchers have shown no adverse results of replacing cereals with sugar beet in working horse diets. And one researcher showed positive results including higher muscle fuel (glycogen) levels and lowered muscle markers of intense work. In this study, oats were replaced with sugar beet pulp. Another researcher has recently shown a reduced hindgut acidifying effect of barley when fed with molassed sugar beet pulp.

Like all horse feeds, sugar beet should be introduced gradually, and increased as necessary. It should be soaked prior to feeding because of the dry, compressed nature of the pulp. Unsoaked, there is a risk of choke — due to the beet taking up moisture from saliva and swelling in the throat, or stomach expansion which can sometimes lead to nasty bouts of colic.

As a winter succulent or mixer for supplements, both molassed or unmolassed beet can be used, and only a cupful or two of soaked beet — a sprinkle of dry beet — is required. As an alternative to compound concentrate feed — e.g. competition or conditioning mix/nuts — the unmolassed version should be used. This should be fed at a rate of at least 1 kg per meal. A multivitamin and mineral supplement — powdered or pelleted — must also be fed, because sugar beet does not balance the mineral shortages in forages. Adding vegetable oil to this adds even more calories for thin or hard-working horses. For overweight equines and those prone to laminitis, tying up or with metabolic syndrome, the molassed version should be avoided. It’s a pity that sugar beet is mostly used in small quantities during winter, when it can actually form part of or the sole concentrate ration when fed with forage. Research has shown that it is safe to feed up to 25 per cent of the total diet, so that’s around 3kg per day to a 500kg horse eating 9kg of forage per day. Replacing some or all of a starchy concentrate diet provides a higher fibre, lower starch and overall, healthier meal for horses.

This article first appeared as a feature in Horse & Rider (UK) magazine. 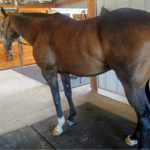