To whom it may concern,

I am a veterinary practitioner, based in Germany. Most of my work involves semen collection, and evaluating sperm quality (AI) from show jumping stallions.

Given that semen quality is genetically determined and strongly influenced by the general well being of the stallion, I am convinced that EVITEX has a significant and positive contribution.

Example 1:
For reasons not fully explained (but thought to be dietary related), the sperm count on one of the stallions dropped to a very low level. A course of EVITEX was immediately instigated and within 5 days there has been a significant increase in the sperm count. It should be noted that the continued use of EVITEX has maintained these high counts.

Example 2: One young stallion produced semen with high levels of mucous. After including EVITEX to his daily diet, the mucous levels reduced appreciably and the quantity and quality of semen is significantly higher.

I have been prescribing and using EVITEX for many years with a great deal of success. I originally used it as an aid in naturally controlling oestrus and an aid in alleviating the symptoms of Equine Cushings Syndrome, as it became soon apparent that its effects on the pituitary are significant.

Being a wholly natural substance (vitex agnus-castus) and being based on purified water, Im confident that EVITEX has an important part to play in the breeding of equines. 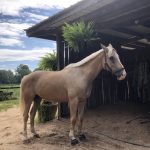 My 12 yr old TB Jasper has been in rehab for a severe LH suspensory injury for the past 14 months.  He has made tremendous progress since leaving a high pressure (and cost) rehab barn and moving to a quiet small farm where he gets to graze with sun on his back again.  I have […]